What are the Largest and Tallest Trees Native to Queensland? 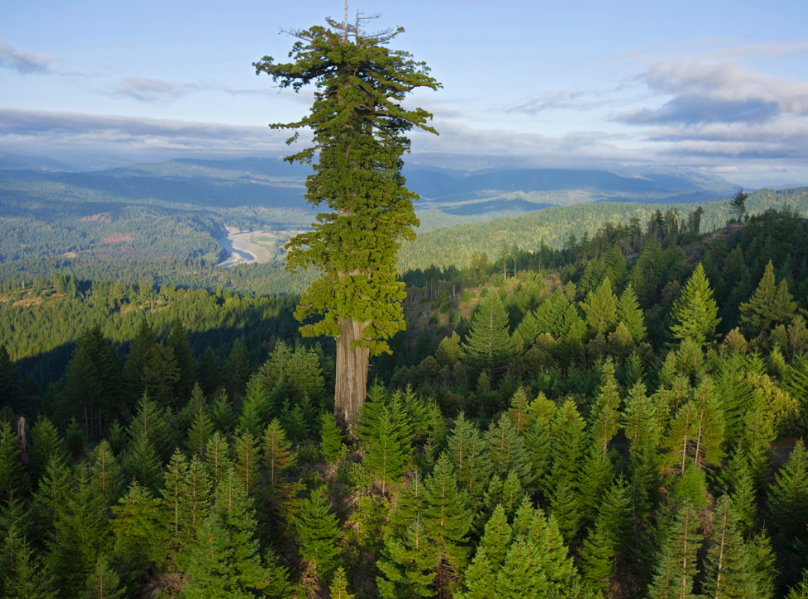 Queesland – The Land of Giant Tree

Queensland is known throughout Australia and throughout the world for its beautiful environment. With an eastern coastline offering expansive white sand beaches, its native forests, its tropical Northern environments and the dry plains of its middle regions, Queensland offers a rich multitude of climates and habitats for various natural flora and fauna. Many Australian native trees thrive in Queensland and become an integral part of its native landscape.

Because of its geographical variety in landscapes and environments, Queensland has many natural trees native to its state. Queensland’s multitudes of environments allow for the proliferation of many varieties of trees which require a range of natural climates. Some of Queensland’s largest and tallest native Australian trees include…

One of the Biggest Tree Species in Queensland

The Agathis robusta is known as the Queensland Kauri Pine and is native to the state, as well as to Australia. It has a very invasive root system and can grow up to 50 metres high and 8 metres wide – imagine the space that would take up in your standard backyard! This tree is also known as a ‘smooth-barked kauri’. It’s a coniferous tree, large and evergreen, growing straight and tall.

The Queensland Kauri Pine generally grows in two very specific areas: firstly, the southern area of Fraser Island and around Maryborough, and secondly, in the Atherton Tableland region west of Cairns. However, the pine can be cultivated in other regions where the climate suits its environment needs.

The Queensland Kauri Pine’s leaves are between 5-12 cm long and are arrange in opposite pairs on the stem. This tree produces globular cones which are around the size of a tennis ball. These cones often litter the base of the tree as they fall.

This particular tree species has been heavily logged in the past. The largest and most prodigious sized Queensland Kauri Pines are now much rarer than they were in pre-European times due to this logging activity. Now, the tree is a part of the Australian native landscape and is iconic to Queensland in the minds of both locals and tourists.

The Queensland Kauri is also used to make timber. Its wood results in a native softwood with a fine, even texture, a pale cream or pinkish-brown heartwood and a straight grain. This timber is suited for many indoor uses, including fine cabinetry, flooring, for making furniture and for violin bellies. However, due to its rarity, it’s not a tree which is heavily used for timber purposes. 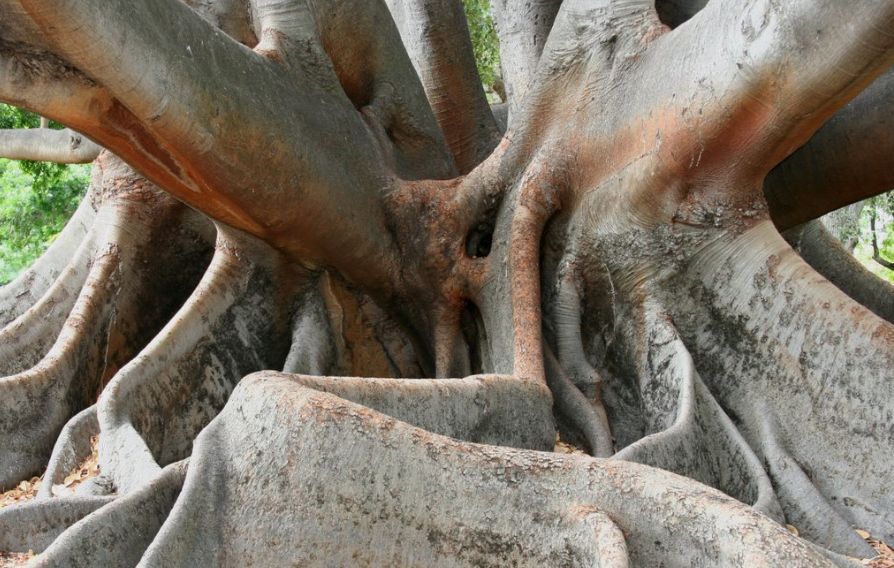 The Moreton Bay Fig is mostly found on Queensland’s east coast, ranging from the Atherton Tableland down to the Shoalhaven River on the New South Wales south coast. It grows in climates which include both subtropical, warm temperatures and dry rainforests. It’s also able to grow from as low as sea level to within a 300-metre altitude.

The tallest Moreton Bay fig in existence resides on a cattle farm near Egg Rock, Numinbah, Queensland. It measures in at 49 metres.

This tree is also cultivated in other suitable environments throughout the world, including New Zealand, South Africa, Portugal, Italy and California in the United States. Santa Barbara’s Moreton Bay Fig Tree was planted in 1876 by a little girl who, the story tells, was given the seedling by an Australian sailor. Today, it’s a popular Santa Barbara tourist attraction.

This is a fruit producing tree. The Moreton Bay Fig is a key source of food in the rainforest for many species, including fruit-eating pigeons, cuckoos, currawongs, bowerbirds and fruit bats.

The Moreton Bay Fig is a long-lasting tree, often living for over 100 years.

Due to its huge shade cover, the Moreton Bay Fig is widely used in public parks. Historically, the tree has been popular with Australia’s early settlers. At the beginning of the 20th century, its planting as a street tree was advocated by Sydney Royal Botanic Gardens director Joseph Maiden. Some of the trees planted in his day are still now living and providing shade cover for modern residents, and their spreading roots are iconic and familiar to the majority of Queenslanders. The Moreton Bay Fig is a great tree for climbing because of its extensive root spread and branches.

Native Australian Aborigines have many more historical and current uses for the Moreton Bay Fig. Long before European settlement, they drew on the tree for its fruit supplies year-round. Once the fig fruit hit the ground, it would fill the air with a very distinctive fermenting aroma. The figs would then be either eaten when ripe and soft or turned into a paste. The tree’s fig fruit contains potassium, calcium, magnesium and iron.

Indigenous Australians also used the inner bark and roots to make cloth and cord, which was then used to weave fishing nets and in making bags. As well, the tree’s branches were used to make waterproof canoes. The tree’s milky sap was also used as a medicine, treating infections and dressing small wounds. 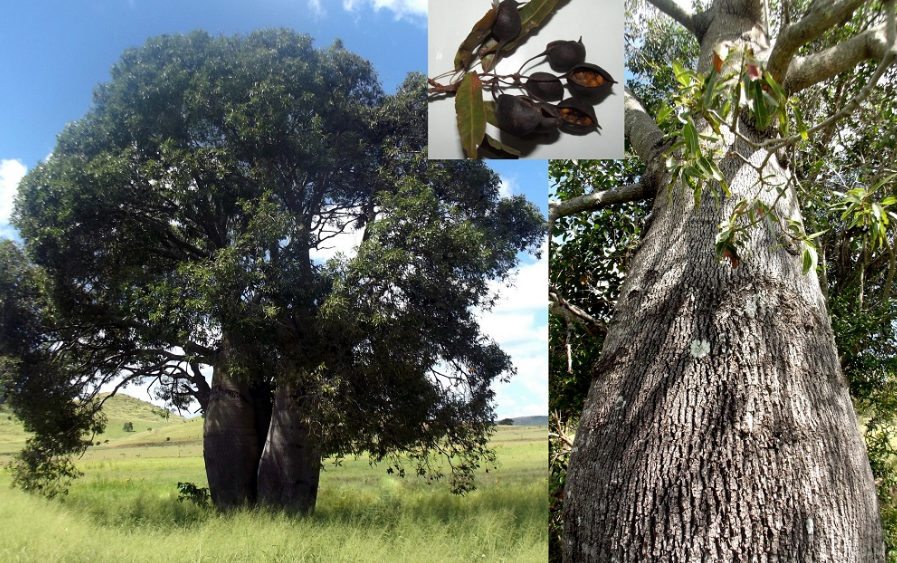 This type of tree is known as a ‘Supreme Feature Tree’, as its shape and form varies within its distinct bottle shape. It can grow in any combination of short-squat, thick-thin, bent-straight, and even in some cases with twin trunks. These trees grow in a variety of landscape designs and are found in many backyards and landscaped public spaces.

Given the Queensland Bottle Tree’s ability to grow and survive in many different environments, it’s found in many regions throughout Queensland. Its highest concentration is found in central Queensland. In New South Wales, a similar tree called the Kurrajong grows in the same type of climates as its Queensland counterpart. It’s able to grow on hills, ridges, slopes, in clay, shale, or in basalt soils.

In Roma, Queensland, the community planted 93 Queensland Bottle Trees in an avenue between 1918 and 1920. Each tree represented a local man killed in World War I. These trees still stand in remembrance today.

The Queensland Bottle Tree grows as a succulent, its size adaptable to the environment it’s given to grow in. It has a dark grey bark on its trunk. Between September and November each year, the tree flowers with creamy-yellow native flowers marked with red. When in their natural habitat, these trees are typically leafless in between the months of September and December. The amount of leaves grown, time they remain and extent of their drop can be affected by both extreme rainfall and drought.

This is another tree which Indigenous Australians have had uses for over the course of thousands of years. The Aboriginal people would eat the roots of young plants and consume the sap which came from the tree when its trunk was cut. The tree’s fibre was also used to make nets. In farming practises, Queensland Bottle Trees will be left as a food source even as the land around them is cleared for farming. When conditions have deteriorated due to drought, at times entire trees have been felled to feed livestock – by removing the bark, a soft, edible pulp is exposed. 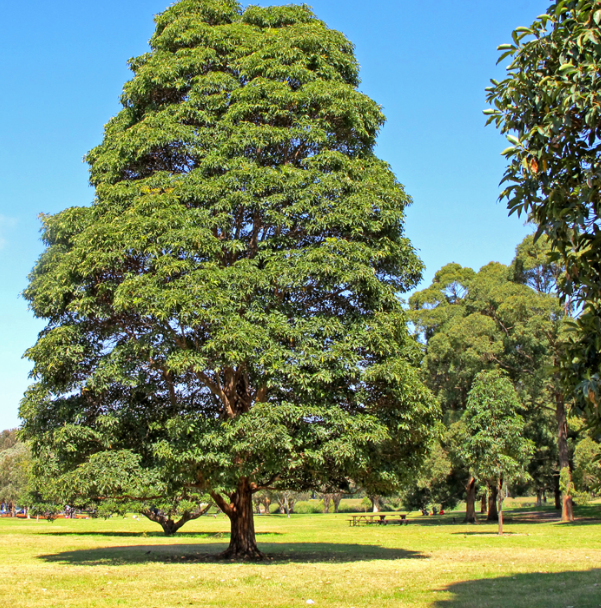 The Brush Box tree reaches heights of 15 metres high and widths of up to 8 metres (in the wild, it can reach heights of up to 40 metres). It’s also known as a Queensland box, Brisbane box, pink box, box scrub, and vinegartree. This is a tree which natively grows in Queensland’s coastal regions, but it is now commonly used as a street tree in many eastern Australian capital cities.

Its high level of resilience to pests and disease makes it a common choice for street use, as well as the fact that it doesn’t require a heavy upkeep in order to remain healthy. This is a tree which will often require lopping to keep it clear of overhead power lines, but it survives the pruning process well.

The Brush Box grows a thick canopy with leaves which are dark green, thick and glossy. It also bears fruit, growing small woody bell shaped capsules which are roughly 1cm in size. Its smooth, beige coloured bark protects the trunk, peeling seasonally to reveal a coppery orange and brown tones. Its native flowers, which are white and fluffy, attracts bees and other insects to the area who hunt for sustenance from its sources.

The Brush Box tree grows in an attractive, round shape. Because of its aesthetic and its ability to tolerate smug, drought, poor drainage and heavy pruning, this tree is popular for use as a street tree.

It’s happiest in a moist soil which has strong drainage but is able to tolerate poorer soils as well. Its preferred climate is sub-tropical with plenty of sunlight.

Brush Box trees are used to protect against erosion and to keep soil in place against natural elements. It produces honey through the bees it attracts, and is also a great tree for nesting birds.

Its trunk is turned into hardwood, which is then used for a variety of applications, including flooring, cladding and bridge decking. When turned into hardwood, its colour can vary in appearance from a greyish pink through to a reddish brown. It possesses a fine and even texture with an interlocking grain. Its natural waxiness is a good base for paints and stains. 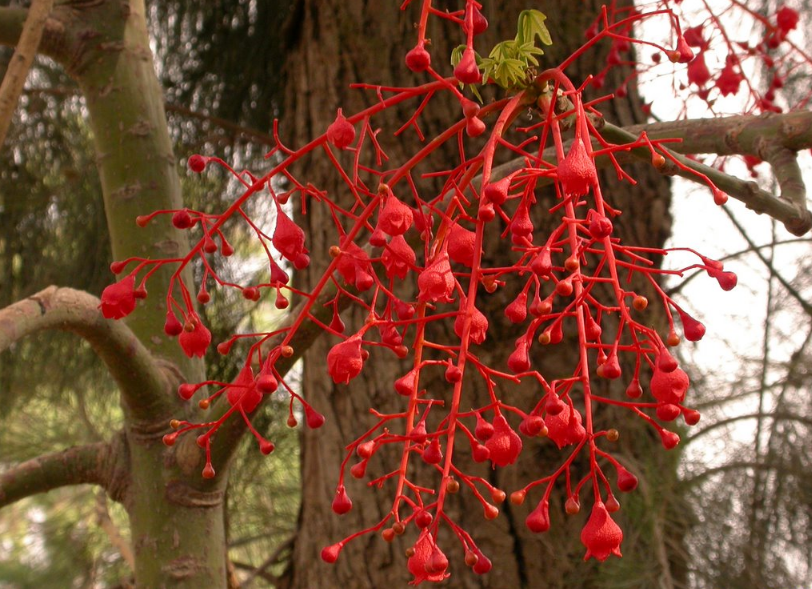 The Illawarra Flame Tree is native to subtropical regions on the east coast of Australia and is a familiar sight for many Queenslanders. It’s known for its bright red bell-shaped native flowers which often cover the entire tree when it’s fully leafless.

The Illawarra Flame Tree is a deciduous tree, shedding its leaves after the dry season. Its beautiful flowering occurs in late spring, creating new foliage which is ready for the summer rains.

It bears a pod-like fruit which is dark brown and boat-shaped, growing up to 10cm long. It grows best in temperate climates, but these days it’s cultivated all over the world because of its beauty. It grows to a maximum height of up to 40 metres, but can only reach this height in its original warm habitat. In other areas, it generally grows to a 20 metre height.

The tree offers food and support to a wide range of native animals throughout its natural growth regions, including caterpillars, pigeons, and butterflies.

Indigenous Australians used the tree as a source of sustenance and to create tools. Its yellow seeds can be eaten after being toasted, providing a food source. However, its seed pods are potentially hazardous, as they contain hairs which can be inhaled, can irritate skin on contact, or even cause blindness. Its inner bark can be used to create fishing line once the trunk has been stripped.

Common in many regions of Queensland and planted and cultivated for its beauty, the Illawarra Flame Tree provides iconic and splendid shade coverage to many streets and public areas of Queensland.