10 Most Invasive Plants and Other Invaders in Australia 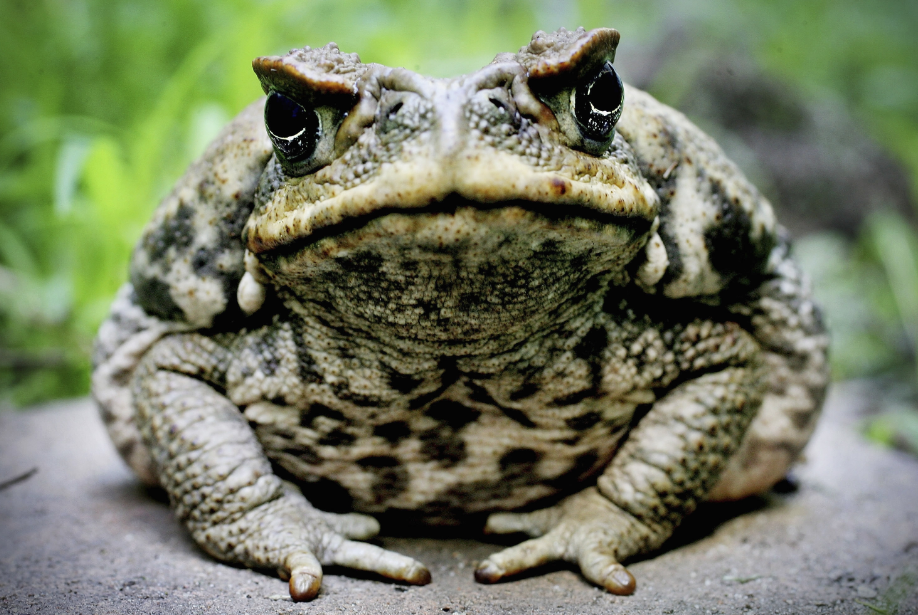 A Country full of Invaders

Australia is known for many of its beautiful flora and fauna – native trees, flowers, plants, and animals of all kind which have been introduced into other regions of the world but are only found natively on our shores.

However, over the course of history, many plant species and types of animals have been introduced into the natural environment, as European settlers landed and were soon followed by people from all over the world. Some of these introduced plants and animals have flourished in our environment, and have grown to be an appreciated and well-loved addition to the natural landscape. However, many of the flora and fauna species they brought with them proved to be incredibly dangerous to native Australian plants and animals. As a result of these introductions, whether on accident or on purpose, Australians have had to find ways to save native species from the at times incredibly invasive and fatal effects of introduced species on Australia’s natural ecosystem.

The Australian Government’s Department of the Environment and Energy has a key focus on the area of environmental biosecurity. This focus provides protection for the environment from the negative effects which are linked with invasive species, including weeds, pests, and diseases. Cane toads were first brought to Australia in 1935, when they were released in 1935 in an effort to combat beetles which were causing extreme damage to sugar cane crops, one of the region’s biggest exports and income generators of the time. However, cane toads rapidly grew into pests, growing beyond human control and spreading throughout Queensland and other Australian states. They began to poison native species, as the poison in their systems would be ingested by animals who preyed on them with fatal results. Cane toads release poison from their parotid glands in defense when they’re threatened, and also pose a threat to humans because of this poison, which can be squirted from a distance when a cane toad feels under threat.

Unfortunately, as Australia had no natural predators or diseases which would work to control the cane toad population, they have continued to pose a threat to Australia’s natural ecosystems across the decades that have followed. Many scientists have spent years exploring ways to eradicate cane toads. As there is still no final solution to the problem cane toads present, euthanasia is currently recommended. Guidelines exist for individuals who wish to euthanize cane toads in a humane way.

The European red fox was introduced to Australia for recreational hunting in the mid-1800s and have since spread across most of the country. Red foxes have played a pivotal role in the decline of many species of native animals.

These foxes are able to survive in many different habitats, such as urban, alpine and arid areas. They’re most active at night and prey on a large variety of animals as their food source. Small animals are their main food source. Sadly, the decline of many ground-nesting birds can be attributed to red foxes, as well as bilbies and some reptiles. 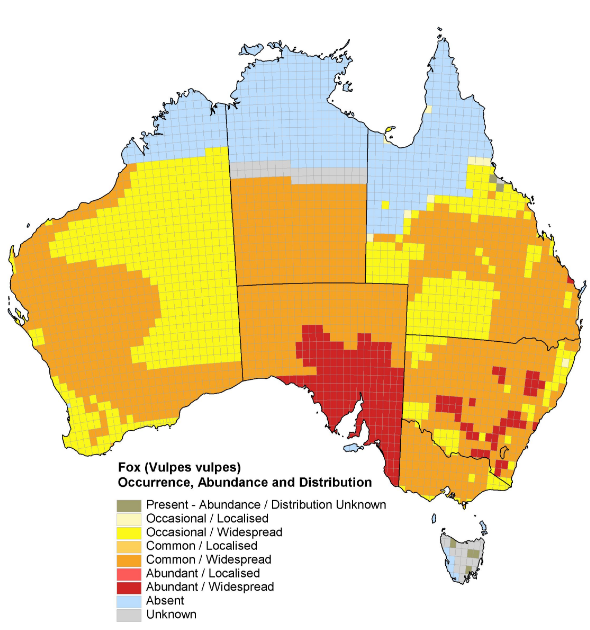 Foxes also pose an economic threat to farmers, as they prey on newborn lambs, kid goats, and poultry.

Scientists are exploring a combination of biological and conventional control methods which, in the future, may be able to reduce the damage caused by foxes. However, current control methods rely solely on conventional options, including shooting, poisoning, and fencing. 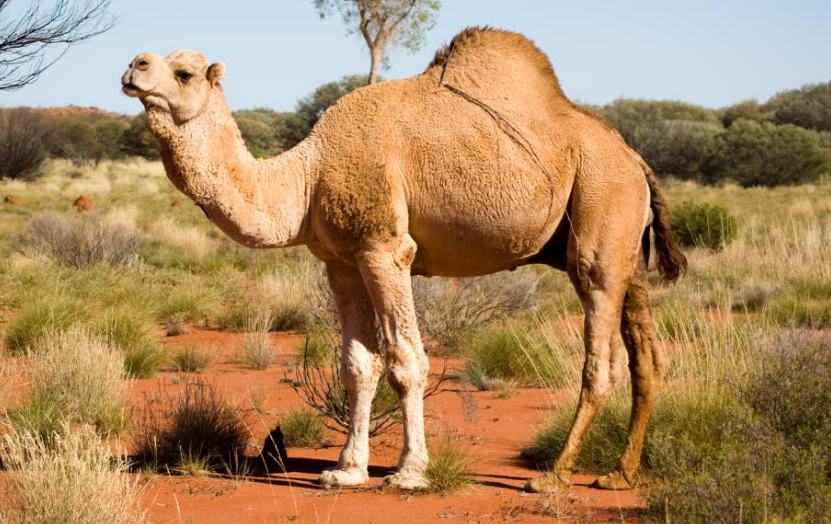 The one-humped camel was first brought to Australia in 1840. During the period of 1866-1907, up to 20,000 camels were imported into the country, as they were well suited to working in dry areas. These camels were used for riding, carting goods and as draught animals. When the automobile was introduced to Australia from 1920 onwards, many camels were abandoned, which led to the wide scale establishment of the feral camel population during the 1920s and 1930s.

Australia currently has over a million feral camels in the rangeland ecosystems, which are causing extensive damage to the natural environment throughout Western Australia, South Australia, Queensland and the Northern Territory.

These camels cause environment damage to vegetation because of their foraging activity, trampling, and consumption of rare and endangered flora. They also damage wetlands and sedimentation through their trampling and create increased competition with native animals for food and shelter. They also can cause damage to fencing on farms, leading to cattle escaping and harsh economic impacts on farmers. 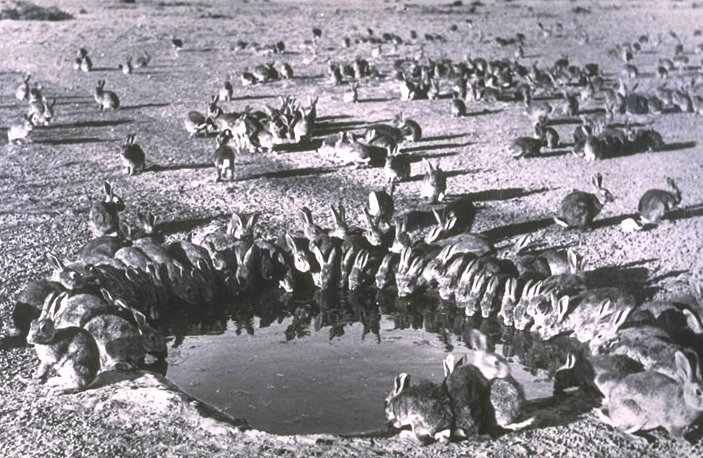 The European wild rabbit is one of the most abundant mammals in Australia, first arriving with the first fleet. They live in many different habits, ranging as far as from deserts to coastal plains. Keeping rabbits as pets is banned in Queensland due to their damaging impact on farmers and the environment when left to breed unchecked.

These feral rabbits compete with native wildlife. They also cause damage to vegetation and bring about land degradation. They’re known to create worsened conditions during drought and after fires, as many animals fight for survival and rabbits eat whatever they can get access to in order to survive.

It’s widely believed that rabbits have already caused the extinction of many small ground-dwelling mammals in Australia’s arid lands, and have also contributed to the declining numbers of many plants and animals which are native to Australia. 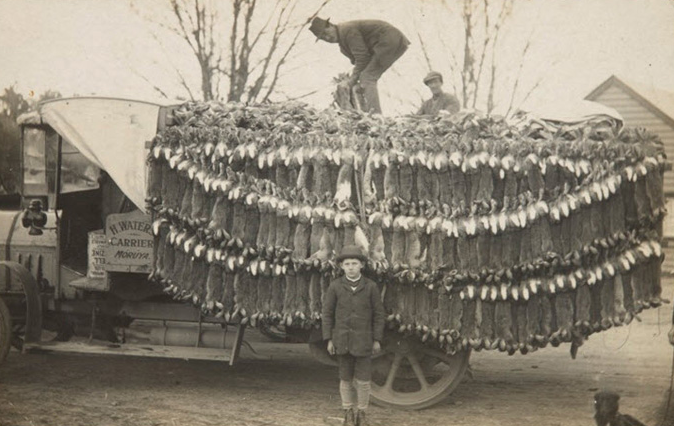 There are a number of varieties of control methods in place throughout Australia, ranging from biological, to chemical and to mechanical. Scientists have been able to use the myxoma virus, which only affects rabbits, to cull their numbers. When it was reduced in 1950, the virus was able to kill over 90 percent of feral rabbits. However, since then, some have developed resistance, which makes this method less effective.

The calicivirus is also used in the wetter parts of the current, but rabbits are also developing genetic resistances to infection, causing a need for further research to identify new field strains.

Warren ripping is a humane and cost-effect control method, as it deprives rabbits of a safe space to breed. People also use fencing, shooting, trapping, and explosives to rid their properties of warrens. 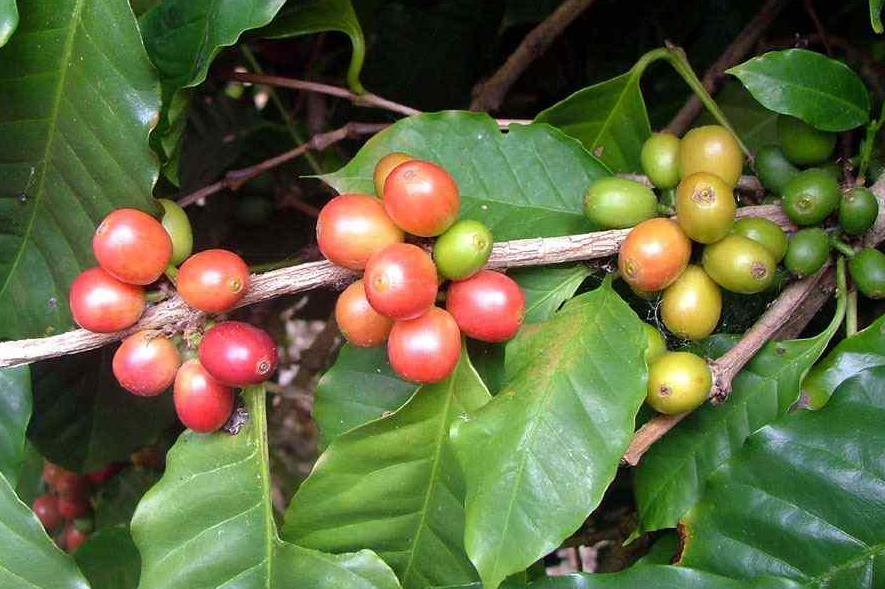 A species from Africa, this type of plant is able to germinate and thrive with very low light density, which positions it as a problematic invader of warmer rainforest environments throughout Australia’s east coast. This species is becoming more and more of a common occurrence amongst native vegetation. It’s able to grow to the height of a small tree and produces fruit in groups of up to 5 on individual stalks. 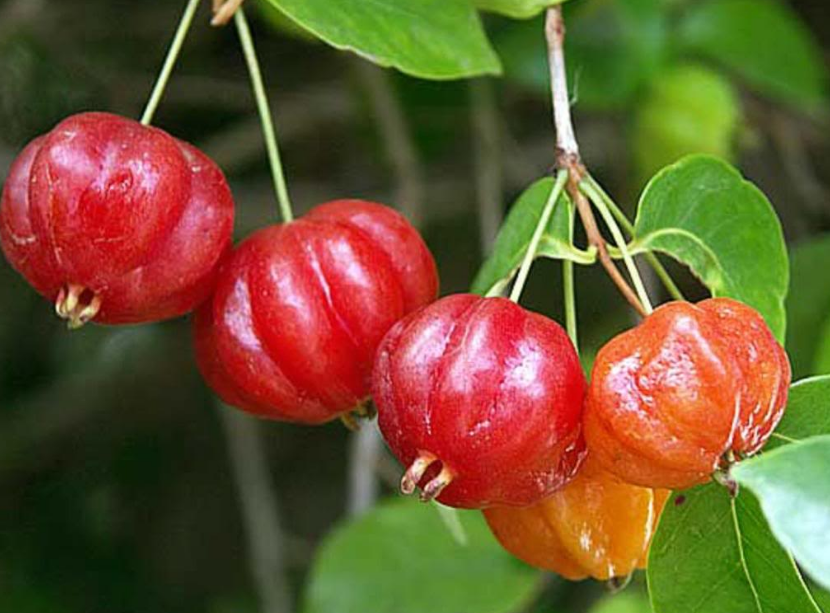 This is a multi-stemmed shrub or small tree, which was introduced to Australia from Brazil. It grows to under 10m tall and is used to form hedges or for its fruit, which is edible. This species is also about to grow under very low light conditions, which means it’s been able to grow invasively alongside natural fauna in many of the warmer rainforest conditions of the east coast. It shares similarities to native plants Lilly Pilly and the Powderpuff Lilly Pilly, which can be planted in its place for both its fruit and its pure white flowers. 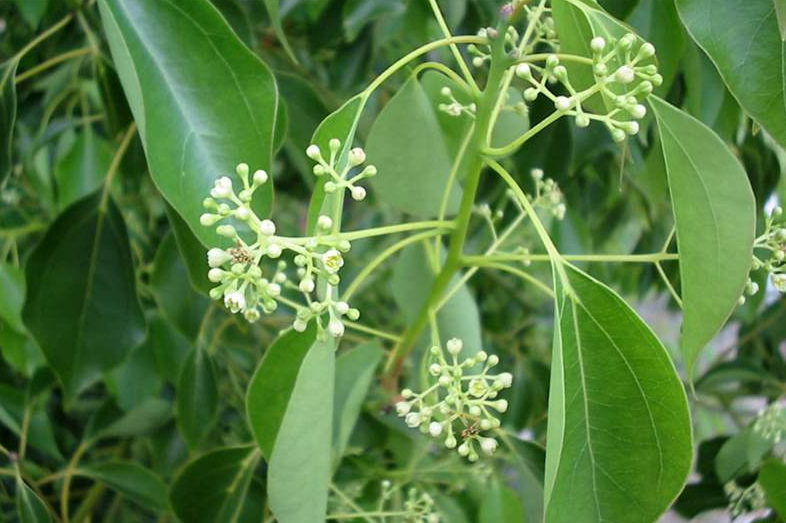 This plant was introduced from China and Asia. It’s a very tall tree which can reach heights of up to 30 meters, and grows in many different conditions due to its hardy and adaptable nature. It has served as a replacement for the Australian Laurel species, providing a food source for native birds. It flowers from late winter into early spring. Older trees produce an abundance of fruit and it also flowers with small, white flowers gathering on the end of younger branches. 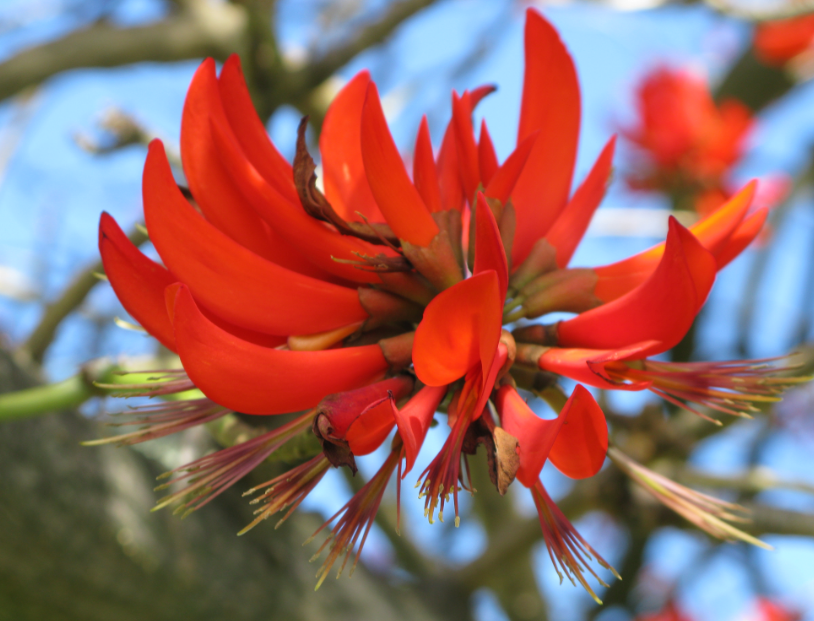 This cultivated species, originating from South America, has become a serious problem weed, affecting stream banks and regrowth vegetation in many moist locations throughout Australia. It is a small to medium sized tree which can grow to over 10m tall. If it is not dealt with, it can quickly form dense stands on creek and river banks, suppressing the opportunity for native vegetation to grow in the process. Native options to plant instead of this invasive and destructive species are the Water Gum, Creek Sandpaper Fig, Cheese Tree (for stream banks), the Firewheel Tree and Tree Waratahs. 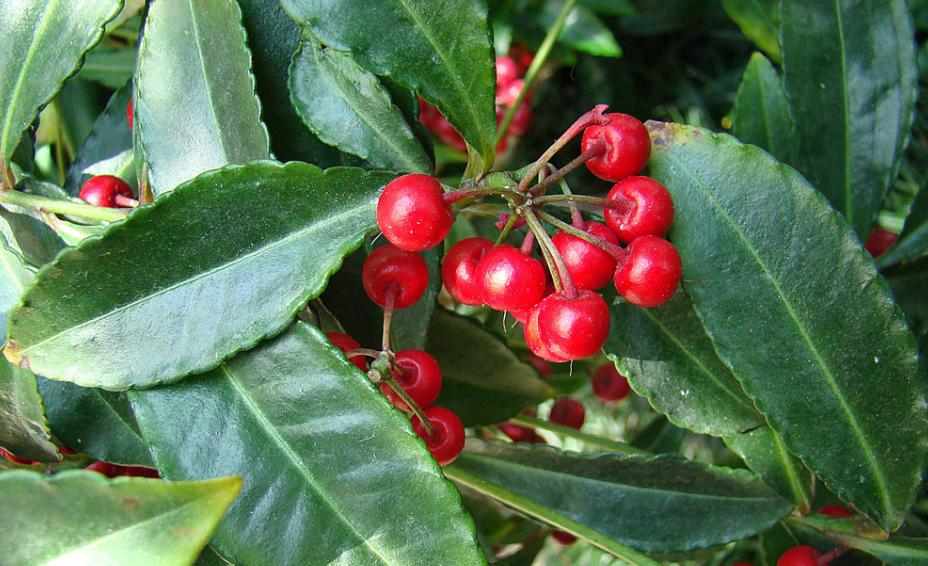 This is an invasive species which is able to germinate and grow without any direct sunlight. It’s a threat to native understory species in the old growth regions of subtropical rainforests, as well as re-growth areas. It’s about to grow up to 2m high and was introduced from Asia. This is a flowering species which flowers across the autumn season. 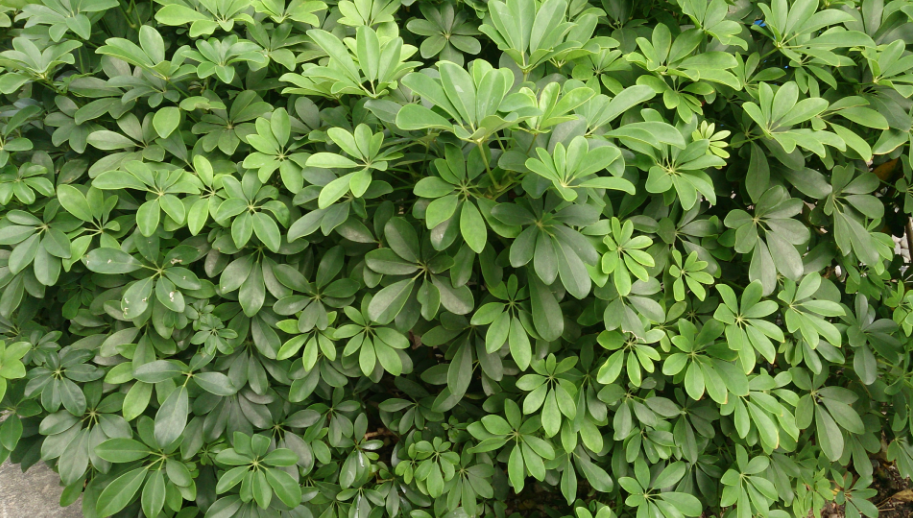 Originating from Taiwan, this species was introduced as an ornamental garden species. However, it possesses stranger-like abilities to overtake host trees and therefore is able to reach a height of over 20 meters. Because of this tree’s prolific fruit production and its ability to begin life as an epiphyte, this tree is a serious threat to native species in warm rainforests. It covers an area from the mid-north coast of NSW up north into Queensland.

The Smooth Cassia is a hardy species which is adaptable in size to different levels of light availability. Introduced from Central America, this species now competes for light in native habitats, including the margins of rainforests, moist tall forests and along roadsides in regrowth areas. It also flowers, with bright yellow flowers with overlapping petals.

Its ability to thrive in so many different native habitats makes this species a concerning invasive plant, as it reduces the availability of sunlight and resources for other native species to flourish. 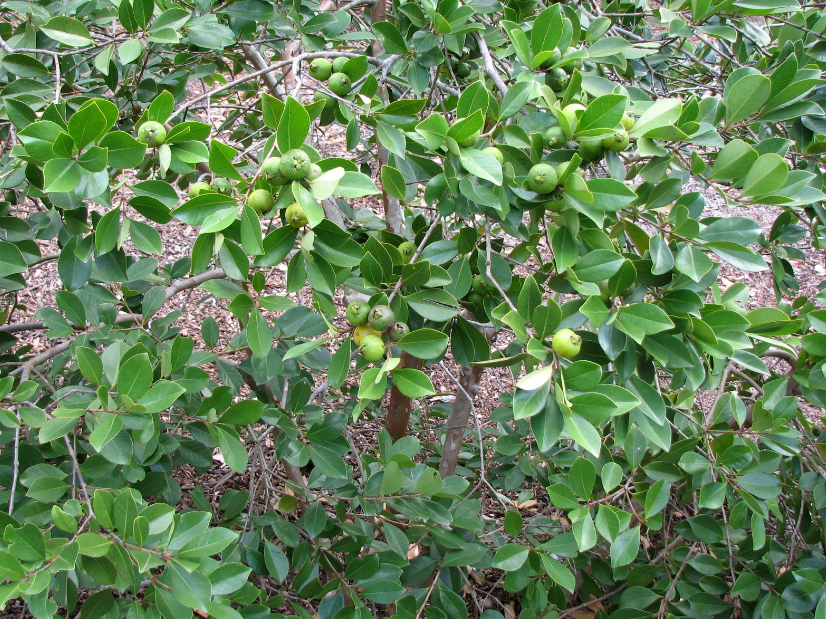 The Cherry Guava species originated from Brazil and has emerged as a serious threat to native vegetation not only in Australia but also throughout Africa, parts of North America and Asia. It has invaded many subtropical and upland tropical rainforests throughout the country. It takes the form of a sturdy shrub or a small tree, growing up to 7m tall. It is often planted for its palatable fruit, hardiness and attractive flower display. It’s a heavily invasive species with a large distribution from the NSW north coast through to Northern QLD. 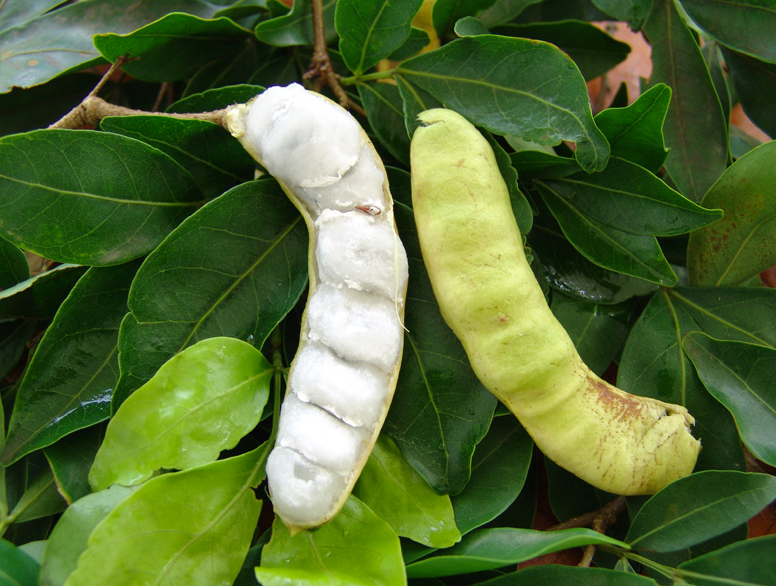 This is a popular species throughout Australia because of the striking appearance of the tree’s flowers, its edible fruit and its hardiness. First introduced from Central America, this has become an invasive species which has spread through subtropical regions of northern NSW. The tree flowers and produces fruit in the form of a flattened and ribbed pod. As an invasive species, it battles with native species for resources, light and water supplies. 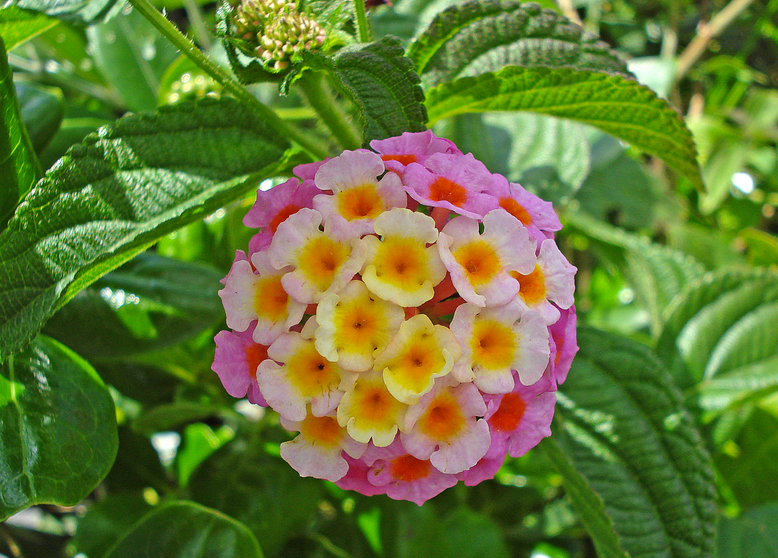 Lantana grows incredibly quickly, producing an abundance of fruit during any season of the year. As it is toxic to livestock, this shrub is a weed of national importance. It was first introduced to Australia from South America in the early 19th century and has since become widespread on the margins of varying rainforest types. It can also cause skin irritation when touched by humans or animals, as the bark on young stems is covered with sharp prickles. The red flowered variation is the most toxic kind for livestock, causing fatalities in cattle and native animals upon consumption. This is a noxious weed which is battled throughout Queensland and NSW. It’s wide and constant spread has proven to have detrimental effects on many native shrubs, including the Brush Wedding Bush and the Velvet Leaf.

Whilst Australia is able to enjoy a huge amount of land space and many varieties of natural landscapes and environmental systems, it’s important as a nation to protect our native plants and animals against the challenges they face from external species. Ecosystems are fragile and changing, relying on a natural chain of predator and prey, species and coverage in order to survive at their best. You can do your part by investigating the flora which is growing in your own backyard and making informed decisions about which plants to cultivate when looking at landscaping and species options.